DevAudit is an open-source, cross-platform, multi-purpose security auditing tool targeted at developers and teams adopting DevOps and DevSecOps that detects security vulnerabilities at multiple levels of the solution stack.

DevAudit provides a wide array of auditing capabilities that automate security practices and implementation of security auditing in the software development life-cycle. DevAudit can scan your operating system and application package dependencies, application and application server configurations, and application code, for potential vulnerabilities based on data aggregated by providers like OSS Index and Vulners from a wide array of sources and data feeds such as the National Vulnerability Database (NVD) CVE data feed, the Debian Security Advisories data feed, Drupal Security Advisories, and many others. 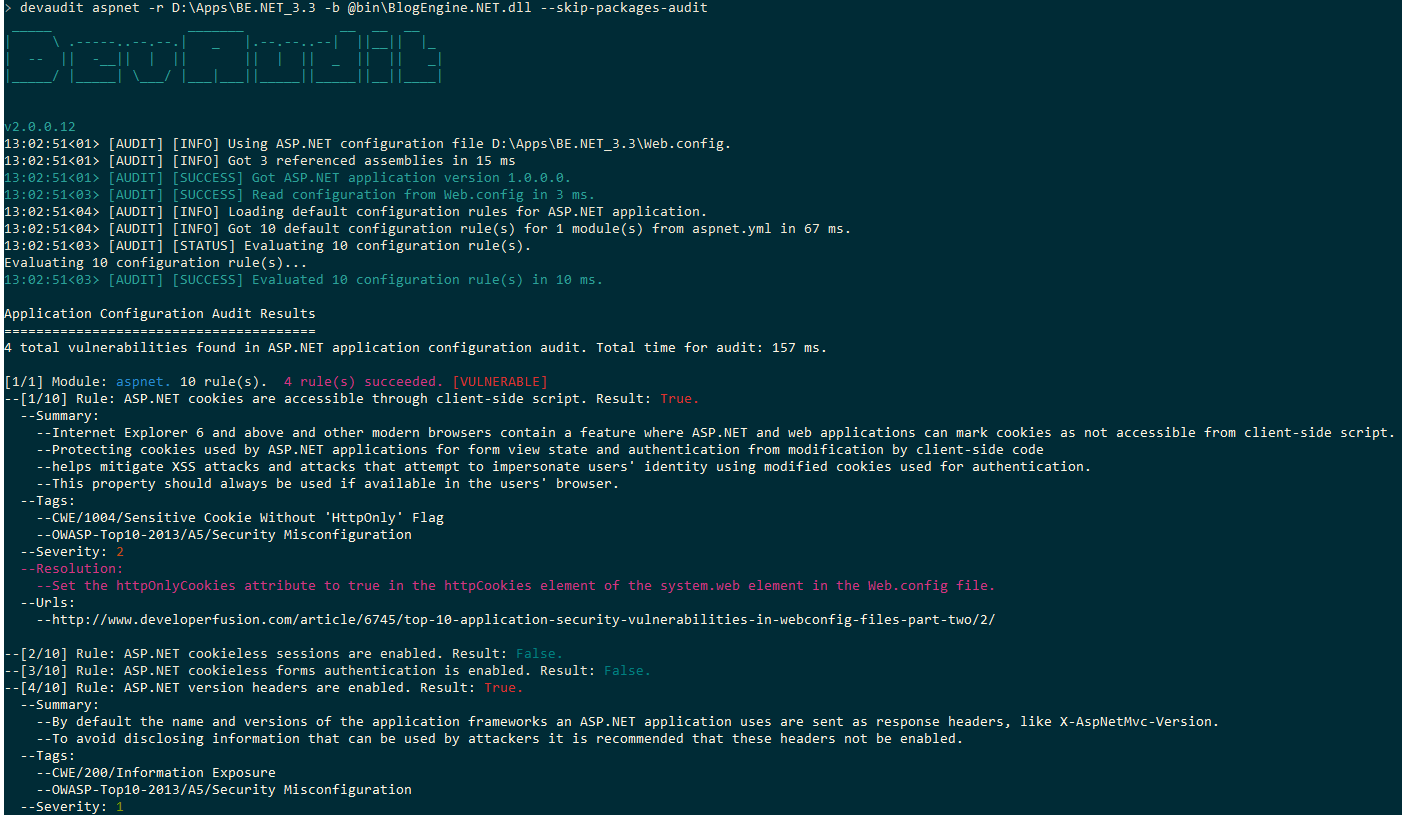 As development progresses and its capabilities mature, DevAudit will be able to address the other risks on the OWASP Top 10 and CWE lists like Injection and XSS. With the focus on web and cloud and distributed multi-user applications, software development today is increasingly a complex affair with security issues and potential vulnerabilities arising at all levels of the stack developers rely on to deliver applications. The goal of DevAudit is to provide a platform for automating implementation of development security reviews and best practices at all levels of the solution stack from library package dependencies to application and server configuration to source code.

On Linux the minimum version of Mono supported is 4.4. Although DevAudit runs on Mono 4 (with one known issue) it’s recommended that Mono 5 be installed. Mono 5 brings many improvements to the build and runtime components of Mono that benefit DevAudit.

The existing Mono packages provided by your distro are probably not Mono 5 as yet, so you will have to install Mono packages manually to be able to use Mono 5. Installation instructions for the most recent packages provided by the Mono project for several major Linux distros are here. It is recommended you have the mono-devel package installed as this will reduce the chances of missing assemblies.

Alternatively on Linux you can use the DevAudit Docker image if you do not wish to install Mono and already have Docker installed on your machine.

DevAudit can be installed by the following methods:

Building from source on Linux

Note that NuGet on Linux may occasionally exit with Error: NameResolutionFailure which seems to be a transient problem contacting the servers that contain the NuGet packages. You should just run ./build.sh again until the build completes normally.

Building from source on Windows

Installing from the release archive files on Windows on Linux

The MSI installer for a release can be found on the Github releases page.

DevAudit is also available on Chocolatey.

Pull the Devaudit image from Docker Hub: docker pull ossindex/devaudit. The image tagged ossindex/devaudit:latest (which is the default image that is downloaded) is built from the most recent release while ossindex/devaudit:unstable is built on the master branch of the source code and contains the newest additions albeit with less testing.

The CLI is the primary interface to the DevAudit program and is suitable both for interactive use and for non-interactive use in scheduled tasks, shell scripts, CI build pipelines and post-build tasks in developer IDEs. The basic DevAudit CLI syntax is:

If you are piping or redirecting the program output to a file then you should always use the -n --non-interactive option to disable any interactive user interface features and animations.

For every package source the following general audit options can be used:

Package sources tagged [Experimental] are only available in the master branch of the source code and may have limited back-end OSS Index support. However you can always list the packages scanned and artifacts available on OSS Index using the list-packages and list-artifacts options.

All applications also support the following common options for auditing the application modules or plugins:

This is an example command line for an application server audit: ./devaudit httpd -i httpd-2.2 -r /usr/local/apache2/ --config-file @conf/httpd.conf -b @bin/httpd which audits an Apache Httpd server running on a Docker container named httpd-2.2.

The following are audit options common to all application servers:

The SSH environment allows audits to be performed on any remote hosts accessible over SSH without requiring DevAudit to be installed on the remote host. SSH environments are cross-platform: you can connect to a Linux remote host from a Windows machine running DevAudit. An SSH environment is created by the following options:-s SERVER [--ssh-port PORT] -u USER [-k KEYFILE] [-p | --password-text PASSWORD]

-s SERVER Specifies the remote host or IP to connect to via SSH.

-u USER Specifies the user to login to the server with.

--ssh-port PORT Specifies the port on the remote host to connect to. The default is 22.

-k KEYFILE Specifies the OpenSSH compatible private key file to use to connect to the remote server. Currently only RSA or DSA keys in files in the PEM format are supported.

-p Provide a prompt with local echo disabled for interactive entry of the server password or key file passphrase.

-w IP Specifies the remote IP to connect to via WinRM.

-u USER Specifies the user to login to the server with.

-p Provide a prompt with local echo disabled for interactive entry of the server password or key file passphrase.

This section discusses how to audit Docker images using DevAudit installed on the local machine. For running DevAudit as a containerized Docker app see the section below on Docker Usage. 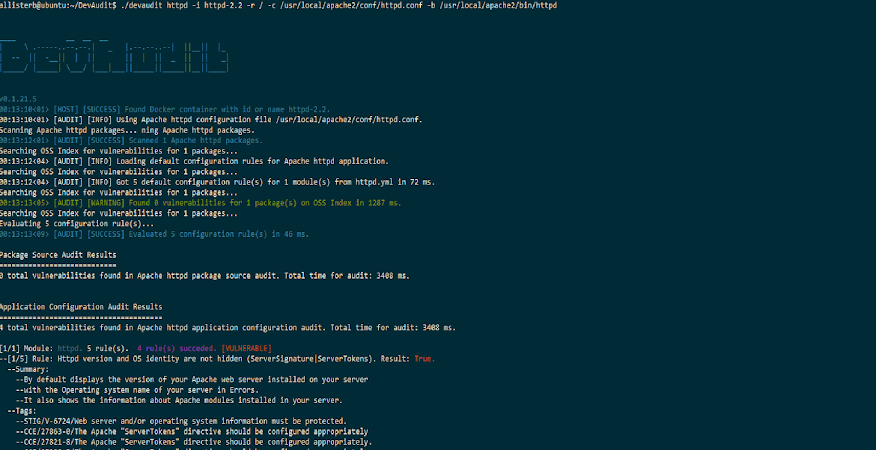 CONTAINER_(NAME|ID) Specifes the name or id of a running Docker container to connect to. The container must be already running as DevAudit does not know how to start the container with the name or the state you require.

The GitHub audit environment allows audits to be performed directly on a GitHub project repository. A GitHub environment is created by the -g option: -g "Owner=OWNER,Name=NAME,Branch=BRANCH"

OWNER Specifies the owner of the project

NAME Specifies the name of the project

PATH Specifies the branch of the project to connect to

You can use the -r, --config-file, and -f options as usual to specify the path to file-system files and directories required for the audit. e.g the following commad: devaudit aspnet -g "Owner=Dnnsoftware,Name=Dnn.Platforn,Branch=Release/9.0.2" -r /Website --config-file @web.config will do an ASP.NET audit on this repository https://github.com/dnnsoftware/Dnn.Platform/ using the /Website source folder as the root directory and the web.config file as the ASP.NET configuration file. Note that filenames are case-sensitive in most environments. 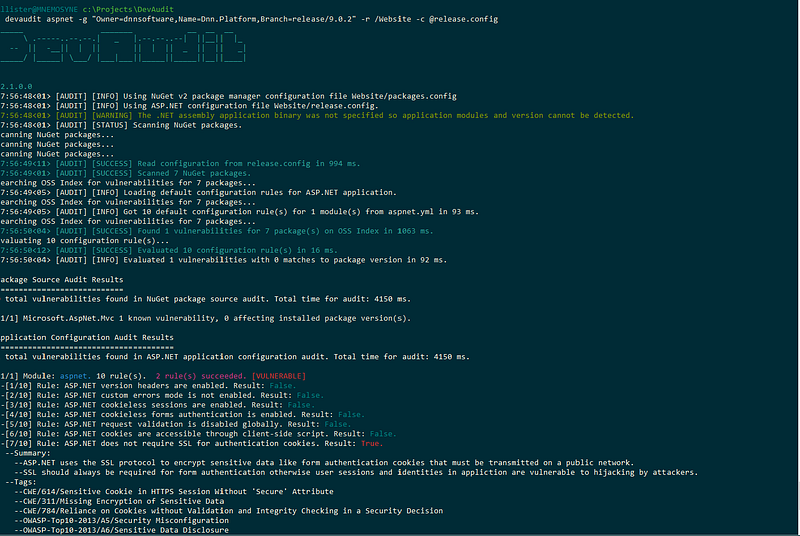 -d --debug Run DevAudit in debug mode. This will print a variety of informational and diagnostic messages. This mode is used for troubleshooting DevAudit errors and bugs.

DevAudit also ships as a Docker containerized app which allows users on Linux to run DevAudit without the need to install Mono and build from source. To pull the DevAudit Docker image from Docker Hub:

The current images are about 131 MB compressed. By default the image labelled latest is pulled which is the most recent release of the program. An unstable image is also available which tracks the master branch of the source code. To run DevAudit as a containerized app:

The -i and -t Docker options are necessary for running DevAudit interactively. If you don’t specify these options then you must run DevAudit in non-interactive mode by using the DevAudit option -n.

will run a MySQL audit on a Docker container named myapp1 from the ossindex/devaudit container.

If you do not need to mount your entire root directory then you can mount just the directory needed for the audit. For example:

will mount read-only the /home/allisterb/vbot-debian/vbot.core directory as /vbot on the DevAudit container which allows DevAudit to access it as the audit root directory for a netfx application audit at /vbot.

If you wish to use private key files on the local Docker host for an audit over SSH, you can mount your directory that contains the needed key file and then tell DevAudit to use that file path e.g.

will mount the directory containing key files at /ssh and allow the DevAudit container to use them.

For running audits over SSH from the DevAudit container it is not necessary to mount the local root at /hostroot.

If you encounter a bug or other issue with DevAudit there are a couple of things you can enable to help us resolve it:

nmapAutomator – Tool To Automate All Of The Process Of Recon/Enumeration

Cybarrior was founded in 2019 and aims to provide the best online security platform for future and expert cyber professionals around the globe.

Forward any inquiries or requests to admin@cybarrior.com